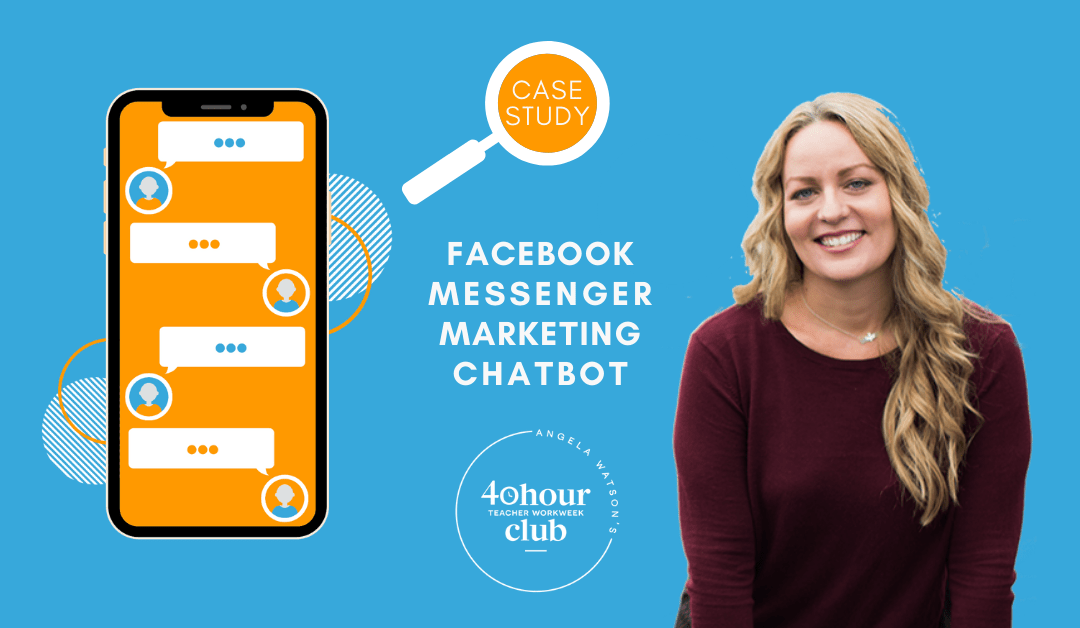 Angela Watson is a productivity and mindset specialist, author, and motivational speaker for educators. She is the founder of the 40 Hour Teacher Workweek Club, an online course and community for teachers which she launches twice per year. The club offers fun professional development on productivity and mindset for over 30,000 educators worldwide. 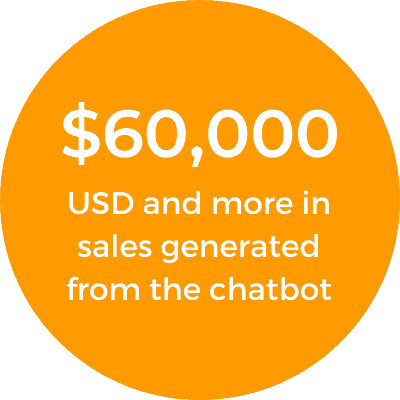 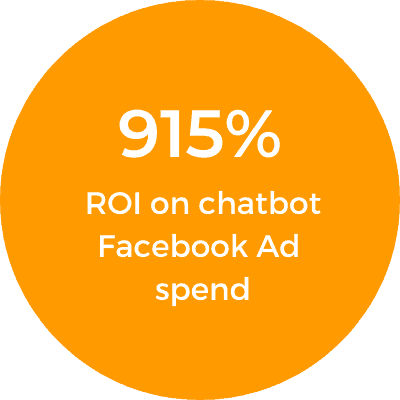 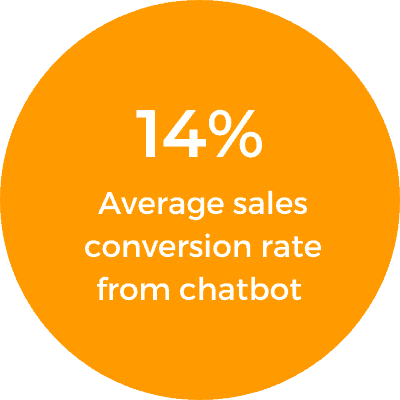 We’ve been working with Angela Watson on her bi-annual product launches for the 40 Hour Teacher Workweek since June 2016.

A big frustration of Angela’s for the first three launches we worked together on was the number of messages she would get to her Facebook page during each of the live launch periods. Angela was answering these messages herself, spending a lot of time helping people determine whether or not the club was a good fit for them. She found that those people who took up the most time were usually those that she ended up advising that the club was not a good fit for them.

This was not an effective use of her time and became unmanageable at that volume. Angela was reluctant to hand over the task of answering questions to VA or another team member, as she had tried that in the past and always found that she obtained the best conversion rate when she was the one responding to messages, following a structured set of questions that she used to determine suitability.

She had a quiz available on her website that provided answers to many of the common questions that people would ask when trying to determine if the club was right for them. This had proved successful in past launches, but the number of people choosing to take the quiz was quite low.

Our solution was to use the questions from that quiz to create a Facebook Messenger chatbot quiz, using ManyChat, that would either pre-qualify people for the club and prompt them to purchase or advise them that the club was not a good fit for them and direct them towards another more suitable product or resource.

Angela was initially reluctant to do so, as she wasn’t sure how her audience would respond to automated messages, particularly given that they were used to having access to Angela directly via this method. Because of this, we took particular care to ensure that we were upfront in explaining that it was a chatbot and not Angela that the audience was engaging with, but we also made sure that it included Angela’s personality, tone of voice and style so that it still felt familiar and congruent with her brand.

This strategy proved to be extremely effective and we have now used this chatbot for the past three launches (Dec 2018 to July 2019) with over 3000 people going through the quiz which has:

The chatbot had a higher sales conversion rate at 14% compared to the average 4% for the entire launch.

This chatbot and campaign also helped to convert many ‘fence sitters’ during the launch and also contributed to an uplift in sales during each of the launch periods for those alternative products that were recommended to those people who were determined not to be a good fit for the club.

One of the biggest challenges we faced was condensing the original more wordy quiz into a shorter, snappier format that would work for Messenger. We also had the challenge of ensuring we carried Angela’s voice into the chatbot so that it was consistent with her brand. To overcome this our team wrote the initial copy, with Angela making final edits and tweaks to ensure congruence.

We set up the quiz for the first launch and then each launch after that we simply duplicated the quiz and made slight tweaks as required.

These changes included reflecting those things that were different from the previous launch (e.g. dates), making use of any new ManyChat features that would be useful, as well as making any necessary improvements based upon the results from the previous launch. For example, in the most recent launch we added in an FAQ carousel at the end (see image below) that used a new ManyChat feature and also allowed additional questions to be answered that were outside the scope of the quiz. 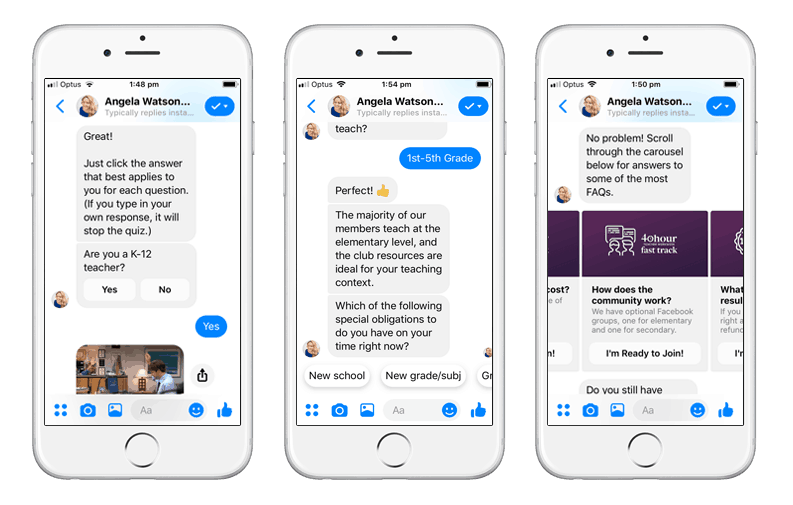 Here’s some of the factors that made the chatbot so successful. 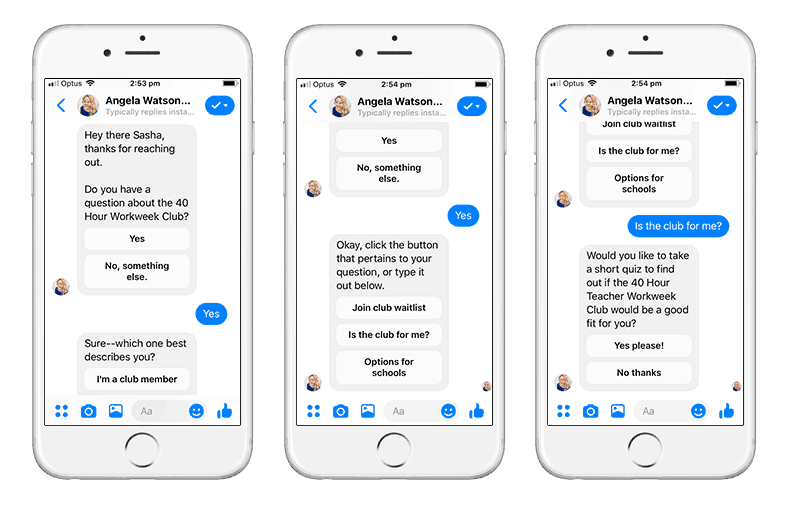 The purpose of this campaign was to help ‘fence sitters’ overcome their objections to joining the club. We allocated most of the budget to a hot audience of people who had visited the sales page but didn’t purchase.
We set up the campaign as a Messenger objective using the JSON integration from ManyChat to trigger the chatbot once the ad was clicked.

The key to this ad copy was calling out right at the top of the copy the objection/question that was holding people back from purchasing. Additionally we made sure that we were clear in the copy of the purpose of the quiz – to find out if the club was right for them.

TOP TIP: Ensure You Have a Clear Call to Action

It’s important in the ad copy to always have a clear call to action. In this case we wanted it to be clear that once they clicked on the ad that they would receive a message in Messenger. This ensured they knew what to expect and didn’t click away immediately in surprise when they were being redirected to Facebook Messenger or didn’t view the message received as spam. 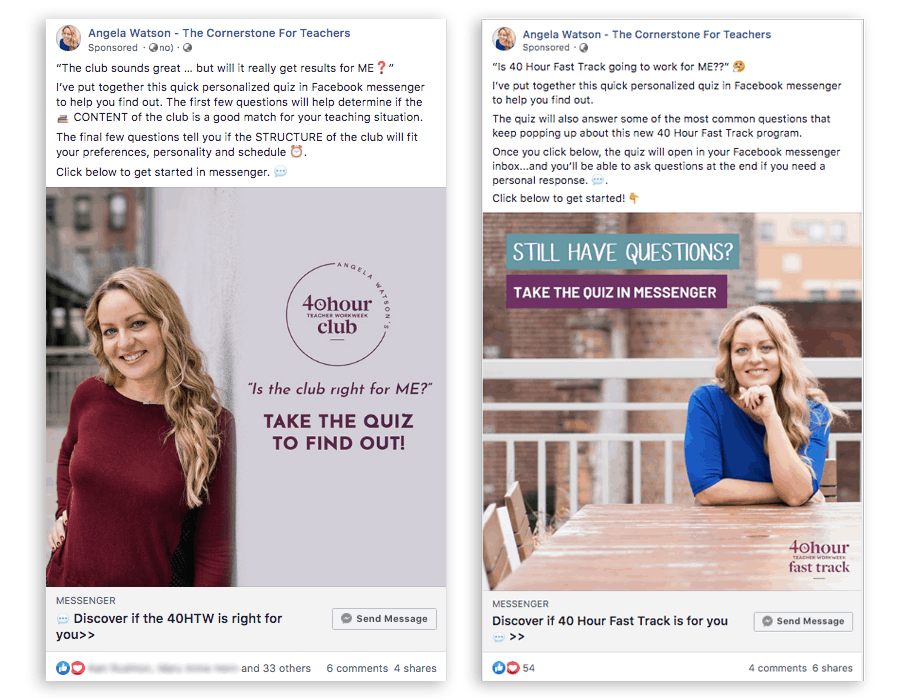 Can I Achieve These Same Results?

Every business is different, with unique challenges and differing circumstances. However, if you have a product or service that people usually feel the need to ask questions about prior to purchasing in order to determine whether or not it would meet with their requirements, then a Facebook Messenger Chatbot Quiz could potentially reduce your workload and assist in converting more people to purchase what you have to offer.

For this to be successful you would need to be able to document a series of questions and answers that can be used to determine suitability and ideally have alternative options to be able to offer to those people deemed not suitable. These could be paid product offerings or lead generation opt-ins.

Would You Like To Learn How To Do This Yourself?

Discover the 3 Chatbots That Will Give Your Business A Competitive Advantage In 2020 And Beyond in this FREE training by Loren Bartley (Impactiv8) and Dan Pinne (Organik Digital).