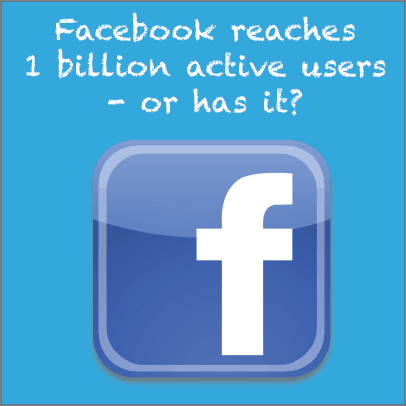 Facebook reached 1 billion monthly active users on September 14 at 12.45 PM Pacific time. Here is a summary of some of the interesting statistics about Facebook since its launch. There have been:

Mark Zuckerberg wrote a blog post on Facebook in response to Facebook reaches 1 billion users landmark, thanking Facebook users “for giving me and my little team the honor of serving you. Helping a billion people connect is amazing, humbling and by far the thing I am most proud of in my life. I am committed to working every day to make Facebook better for you, and hopefully together one day we will be able to connect the rest of the world too”.
No doubt Facebook are happy to achieve this milestone and generate a positive story to shift the balance away the negative press regarding flagging stock prices, questionable privacy policies, security problems and continual redesigns of the platform. Despite all the negative press that Facebook receives and predictions of a mass exodus from Facebook, the number of Facebook users have continued to grow and have in fact doubled in a little over two years. It’s hard to believe that it was only July 2010 when Facebook reached the 500 million mark!
The press surrounding this announcement has not all been positive. Many people are questioning the legitimacy of this landmark, particularly given the recent press in August 2012, where Facebook estimated that 8.7% of accounts were “fake” accounts, comprising of 4.8% duplicates, 2.4% user-misclassified and 1.5% undesirable accounts. For this 1 billion figure to be accurate, user growth would have had to more than double since the last quarter if the figure excluded the duplicate and fake accounts.
Whilst I believe Facebook is continuing to grow, I too am sceptical as to whether or not this is an accurate landmark that Facebook is celebrating, but at the end of the day, does it really matter?  Facebook is still massive, it is still where the people are at and it is still where businesses need to be if they want to access their customers and potential customers. So I think Facebook needs to be congratulated for that alone.
So what do you think? Do Facebook actually have 1 billion active users? Let me know your thoughts in the comments below.