The Night I Fell In Love With A Hashtag – A True Love Story! 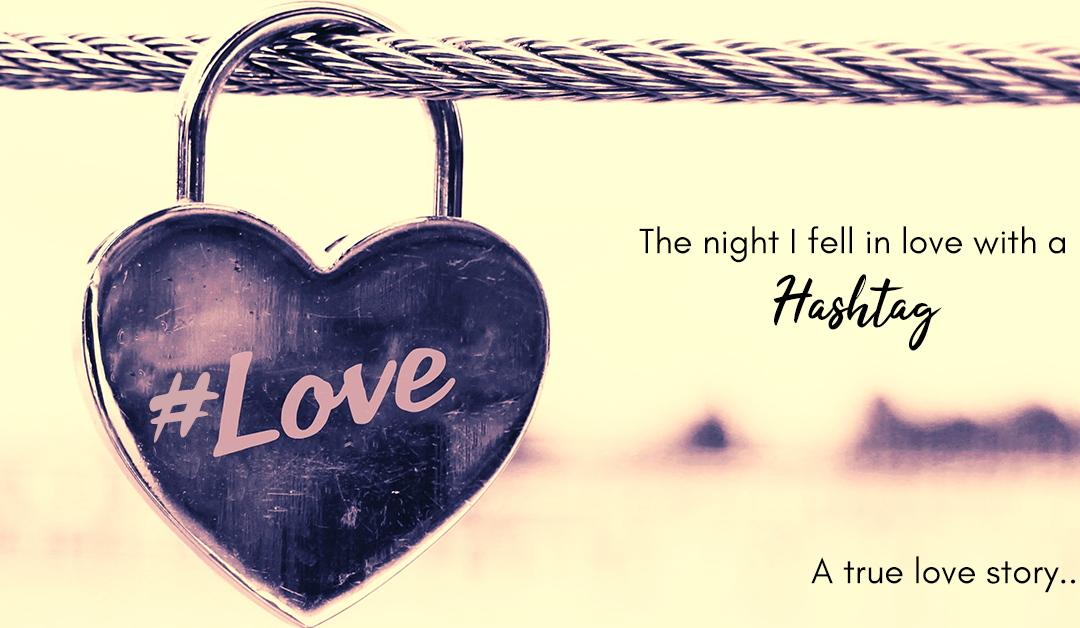 I didn’t want to speak to soon, but it’s official – I have fallen in love!
Yes, I know, I am already married, but I couldn’t help myself. I have a new love in my life and I am not sure I can hold back anymore. I need to share it with the world. I want to shout it from the rooftops. I can’t think about anything else…
You see the truth is that I have fallen in love with Hashtags! Well to be honest, it was one particular Hashtag (#LorenB40) that did it for me, but as a result my eyes have been opened up to the life enriching opportunities that Hashtags can provide and therefore I am declaring that I LOVE HASHTAGS!
So how did this come about?

How I Fell In Love With A Hashtag 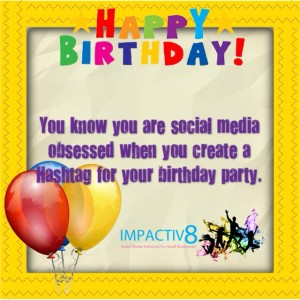 A few months ago I started planning my 40th birthday party (yes, I know – hard to believe that I am that old). Given how big a role social media plays in my life these days, I thought it would be fitting to include an element of social media in my party and chose to do so in the form of a Hashtag.

So, I created a Hashtag for my party.
Yes, I am one of those people!

My friends all laughed at me, but secretly I knew I was onto something. Although I must admit that I wasn’t quite sure how inspired that decision was going to be at the time.

So I sent out my invites, complete with the #LorenB40 Hashtag. To be honest, the response was not what I had hoped, as few of my friends even knew what a Hashtag was – I didn’t let that stop me!
I started using that Hashtag whenever I posted anything on social media about my party. Even though I was the only one using the Hashtag initially, I did start to create a buzz amongst those coming to the party (the important people), as well as those that couldn’t make it. 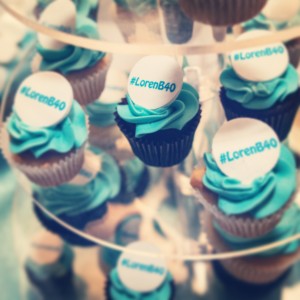 I embedded the #LorenB40 into all aspects of the event planning. So much so, that I even included the Hashtag on my cupcakes (#ilovethecupcakequeens)!

I set up a Hashtag Tagboard for #LorenB40, which meant that I had a live feed in the one place of all of the Twitter, Instagram, Facebook, Vine and Google+ posts that included the #LorenB40 Hashtag. The Facebook and Google+ API unfortunately do not allow photo posts to show up on the Tagboard (at the moment – they are working on that) and there seems to be some glitches where not every image displays, but most posts including the #LorenB40 Hashtag were appearing on the Tagboard.
To get the ball rolling, in advance of the party, I sent out an email to all those that had RSVP’d “yes” and encouraged them to share a picture or us together or an anecdote of something we got up to via their social media network of choice using the Hashtag and alerting them to the fact that I had a Tagboard set up so they would have some idea what I was on about. A couple of people posted using the Hashtag in advance of the party, but most didn’t. 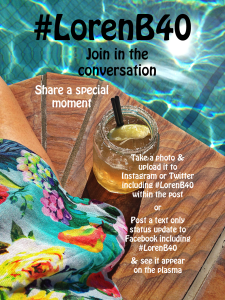 Despite the lack of pre-event involvement, by the time the night came around, I had sparked enough interest that when people stepped in the door they were expecting some level of social media interaction and that is exactly what I gave them.
I had a plasma set up with the live #LorenB40 Tagboard feed on display, along with instructions on each of the tables and suddenly everyone wanted to get involved! Before too long everyone was getting involved. I even had party goers signing up to Twitter and Instagram for the first time just so that they could get in on the action!
I had a photo booth by Snap Studios set up at the party to capture memories and they were including #LorenB40 with each image they tweeted throughout the night, enabling a constant flow of good times on the big screen for all to see.

Even though I was not trending on Twitter (which was never my objective anyway), the level of social interaction (and good times) went up as a direct result of the social media activity that was taking place. I even had people that couldn’t attend the party following along from at home and posting their own messages to the TagBoard by using #LorenB40. I loved it that my friends from afar could still participate in the party.
By incorporating a Hashtag into my party, I was able to bring in an additional element of interaction and engagement amongst party-goers, whilst at the same time creating memories that will last a lifetime.

And that my friends is how I fell in love with the Hashtag!

Hashtags can create an additional element of interaction and engagement in the lead up to, during and after an event.
I would encourage you to create and use a Hashtag for the the next event you conduct, emulating #LorenB40 and you never know, you too could fall in love with Hashtags!