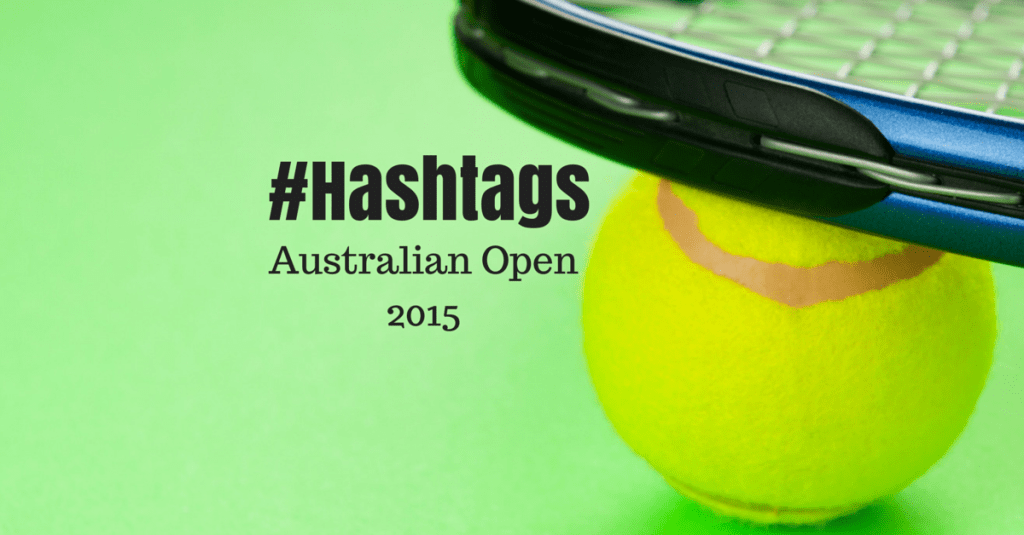 The Official Australian Open hashtag for 2015 is #AusOpen.
[Tweet “List of the main Hashtags being used at the #AusOpen 2015”]
The Australian Open event organisers are also promoting the following hashtags around their event:

It’s great to see that the #AusOpen are encouraging people to social share images from centre court this year by using venue specific Hashtags and making announcements over the PA. The announcement over the PA on centre court earlier said “Would you like to see your photos at Rod Laver Arena. Use the Hashtag #AOSelfie and #RLA to see your photos up on the big screen.” This is a great way toencourage more social sharing at events.

However the official hashtags are not always where the best action can be found. Often it’s the other related hashtags where you will find the true Magic of the tennis.

Hashtags At The Australian Open 2015

Hashtags are in overdrive at The Australian Open this year. In case you were wondering which other Hashtags you could use in relation to the Australian Open 2015 and in what context, here is a breakdown of some of the more popular ones.

Hashtags that are being used (by the less informed) in place of the official hashtag for the Australian Open 2015 and getting a bit of traffic are:

It would be useful search these hashtags also if you are looking to see what others are saying about the event, but I wouldn’t use it over the official hashtag, as your content won’t gain as much exposure.

The following hashtags are being promoted at the Australian Open 2015 as an extension of the official sponsors privileges. Some of the hashtags are event specific, some promoting their most recent marketing campaigns and others just the usual hashtag associated with their brand.

Players names are being used to group conversations around player activity. In most cases it is the last name, such as #Federer, #Nadal and #Tomic. However many people are also choosing to use the players firstname, as in the case of #Novak or event the full name, like #NovacDjokovic.
For some players, it is a play on their name that is taking off, as is the case with #TheKokk for Thanasi Kokkinakis.

#TheKokk AKA @TKokkinakis, what a fighter. Great effort from the youngster! One to watch for sure #7Sport #AusOpen
— 7Sport (@7Sport) January 16, 2014

Some of the other hashtags being used around the Australian Open include: