Social Media At The Australian Open 2016 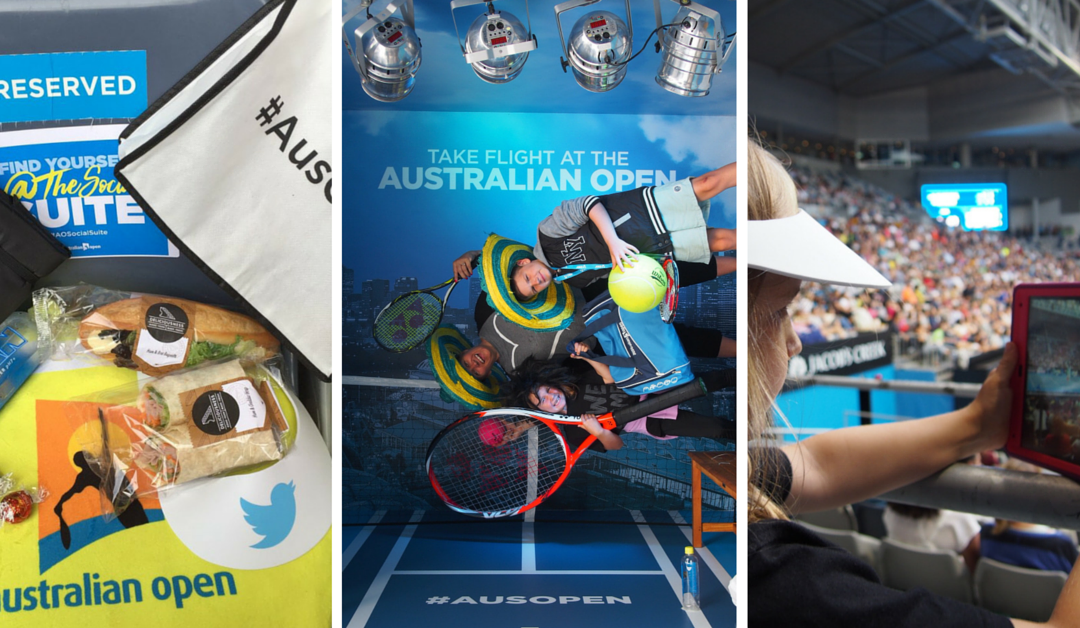 Social Media At The Australian Open 2016

Like in 2015, there was a major focus this year on encouraging tennis goers to generate buzz about the event on social media in the form of user generated content using the various event hashtags. However, one of the big changes this year though was the number of platforms in which they were encouraging fans to do this on.
In 2014 the Australian Open were promoting their Facebook, Twitter, Instagram and YouTube presence through signage throughout the Melbourne Park precinct where the event is conducted. Those same main platforms were promoted around the grounds in 2015 (although they didn’t seem to have a sign promoting them all that year – not that I saw anyway). This year Vine, Periscope, Weibo, Wechat and Snapchat had been added to their social media presence platform promotional strategy. 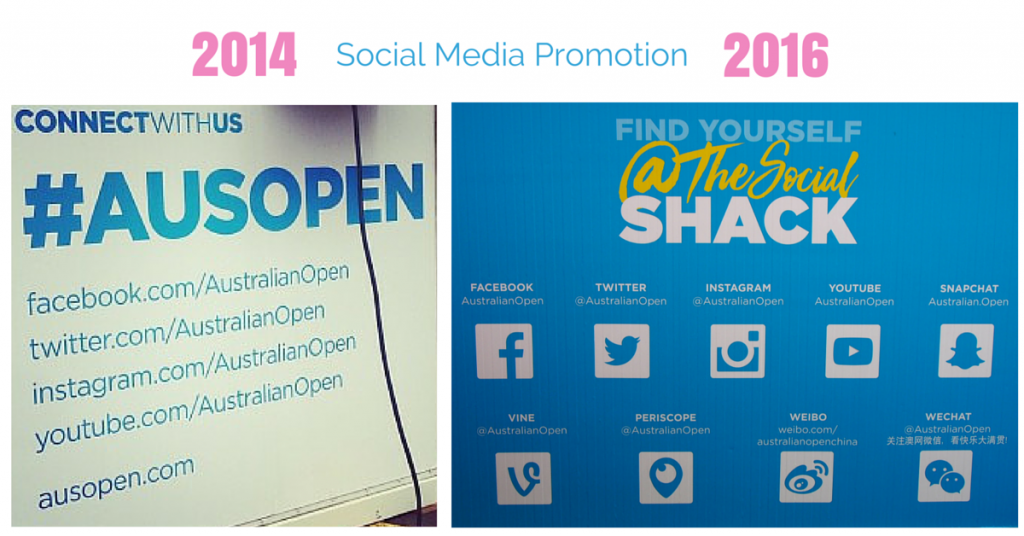 The Australian Open was also promoting it’s main event hashtag (#AusOpen) throughout both court side and around the grounds. Their giant #AUSOPEN hashtag was located prominently in Garden Square again this year for people to photograph themselves in front of. This was one of the first years I didn’t do this, as it was raining at the time.
Perhaps this is a learning point in itself. Place those things that you wish people to photograph in areas that are not impacted by weather so that people continue to social share those images regardless of weather conditions.

Thanks for joining us at The Social Shack @mhingis @Leander! #ausopen pic.twitter.com/yfF8DPyuoR

Having way too much fun at the #ausopen taking an #aoselfie with #kiatennis A video posted by Loren Bartley (@impactiv8) on Jan 21, 2016 at 9:25pm PST

The Instagram “selfie” competition that The Australian Open conducted last year generated a lot of engagement for the event. This was no doubt a success for them, as they conducted a similar competition this year, asking tennis goers to use the #AOSelfie and #KiaTennis hashtags for their change to go in the drawer to win one of twelve iPad minis, with a KIA Sportage as the major prize.
They also offered the opportunity to pick up an Instaprint copy of your #selfie at the #SocialShack as event momentos. 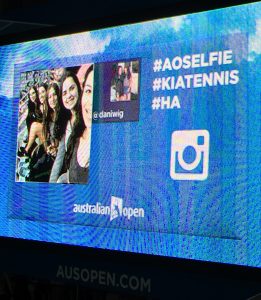 In addition to this, if you included the hashtag for the stadium you took the selfie in (i.e. #RLA for Rod Laver Arena, #MCA for Margaret Court Arena or #HA for Hisense Arena), then you had a chance of seeing your selfie on the big screen at that court.
When these images were displayed on screen, the Instagram logo and the three required hashtags were included alongside them, making it easy for entrants to understand what they needed to do to get their images on the screen. Displaying these Instagram images court side is also a great way to encourage more participation, as it provides a more immediate incentive for people to participate, rather than just the hope of being one of the few to take home one of the main prizes.
I did hear an announcement once that you could see the full terms and conditions online, but never caught the web address. I found it later via a Google search. You can see the #AOSelfie and #KiaTennis Competition Schedule to Terms of Entry here.

Enjoy the fun of the #AOSocialSuite by taking a photo of you at the #AusOpen and hashtag #AOSocialSuite for the chance to be exclusively upgraded to our VIP experience at @hisensearena!   A photo posted by Australian Open (@australianopen) on Jan 21, 2016 at 3:04pm PST

I submitted a couple of entries using the hashtag in hope that I would win this experience so I could undertake a more rounded report on this competition. I was delighted when one of my tweets later in the day won me a seat in the #AOSelfieSuite to Daria Gavrilova (AUS) defeat Kristina Mladenovic (FRA) in a thrilling match. Here’s the tweet that won:

Here’s my retweet of the notification that I got from the Australian Open that I had won:

The Australian Open then direct messaged me the details of how I could redeem my upgrade, giving me 30mins to respond to claim my prize. We then communicated back and forth via direct message a few times until I was comfortably seated in the #AOSocialSuite. Not only did I receive a comfy seat to watch the match, but I also was also fed, watered and given a bag full of goodies to take home.

Won myself a fancy seat and loads of goodies at #AusOpen with #AOSocialSuite #winning pic.twitter.com/fjXEoga5vh — Loren Bartley (@Impactiv8) January 22, 2016

The wireless phone charger was by far my favourite part of the prize stash and it was the perfect gift late in the day when my phone was almost out of juice. 🙂

Whilst I love the concept of this competition, as it provides an upgrade experience to those people who only have a ground pass to the event, there didn’t appear to be a lot of entries into the competition. This could’ve been due to a number of factors including:

Having said that, as a winner, I thoroughly enjoyed the experience and would recommend other businesses look at how they could do similar at their events. 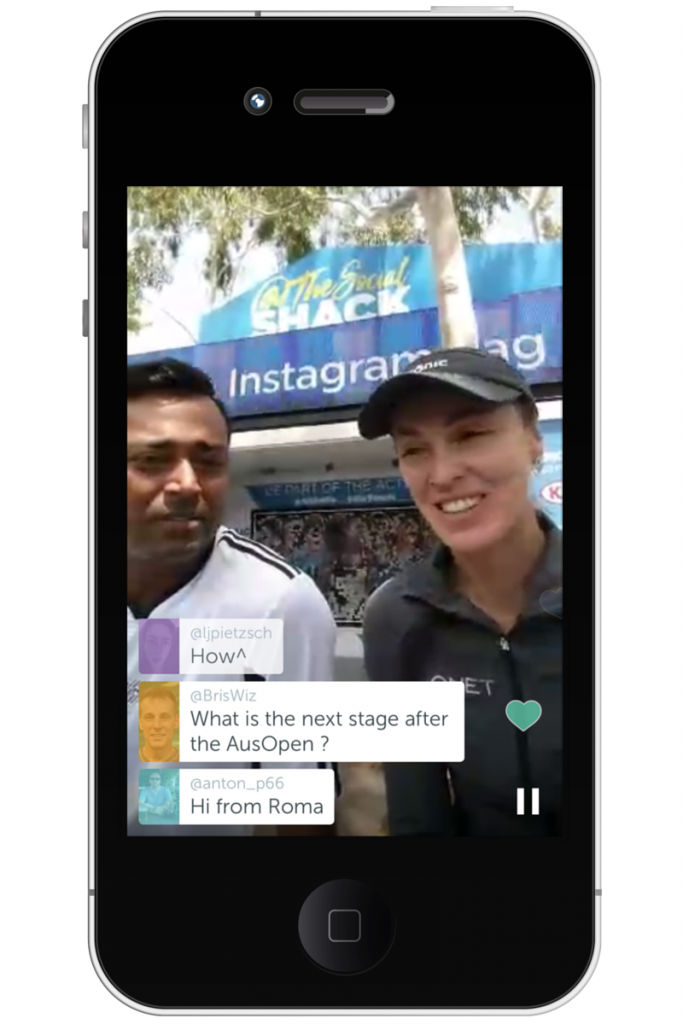 Not only did the Australian Open up the amount of video that it was sharing on the more traditional social media platforms, like Facebook, Twitter and Instagram, but the event also got involved in live streaming video content as well.
The Australian Open had a presence on Periscope this year, but they didn’t seem to do a lot of broadcasts and there were no live broadcasts of any of the matches. What was great about their broadcasts is that they provided the opportunity for tennis fans to peak behind the scenes, as well as ask questions directly of the tennis players that they interviewed on this platform.
The broadcasts I watched received a decent number of attendees, engagement and replay viewers. For example, the Hingis and Leander Periscope on 24 January attracted 636 live viewers and 77 replay views within the first 2 hours of the broadcast. As Periscope broadcasts only remain live on the platform for 24hrs, it’s not possible to go back and see the full extent of their broadcasts. I couldn’t find anywhere else that these broadcasts were published, being a potential loss for those that would’ve liked to have watched the broadcasts, but were not able to do so live or within the replay period.
If you are going to use Periscope for live broadcasts during your event, then I would encourage you to save the recorded broadcasts and see how you can repurpose that content on another platform like your blog or YouTube to increase the lifespan of the content, particularly if your broadcast would be of value to your wider audience.

Grand Slam Gal wrote a great blog post on how Periscope has the potential to be a game changer for tennis fans, which also outlines a bit more about what Periscope is and how it can be used to enhance events.

Almost all of the event sponsor promotional stands that I visited had some form of social media sharing integrated into the experiences that they offered. In most cases, this seemed to serve two main purposes for the brands:

Having fun at the @ausopen playing tennis with my favourite racquet. I need one this big to be able to hit the ball. #mywilson #ausopen   A video posted by Loren Bartley (@impactiv8) on Jan 21, 2016 at 7:53pm PST

What was interesting to note this year is that I was asked for my phone number (rather than my email address) by most stands so that I could be sent the link to access the content I had created, whether that be a photo or video. This was a shift from last year, where most companies were requesting my email for delivery.
I must say that I preferred to give my phone number as it was much quicker and I have to assume that was part of their strategy, as one of the frustrations with promotional stand experiences like these is the length of time that you have to wait.
Interestingly, in each of the cases where I only gave my phone number, I was later asked for an email address when I clicked on the link to download the content for social sharing. So those companies now have two methods that they can contact me via now for marketing purposes. It will be interesting to see what kind of follow up I get via phone and email after the event as a result of the data I handed over at the event.
In all cases, the terms and conditions were either not readily available or buried behind a pre-ticked check box that I didn’t bother reading or I wasn’t given the option to read by the personnel helping me fill out the details.

Whilst not specifically social media related, it was interesting to see the inclusion of 360 video as part of the experiences offered at a couple of the promotional stand.
ANZ was allowing you to quite literally step into Novak Djokovic’s shoes and walk from the change rooms through to centre court as Novak, with the ability to look all around by moving your head around to enjoy a fully immersive experience. The picture quality and accompany audio quality was amazing, making it a great experience to participate in. 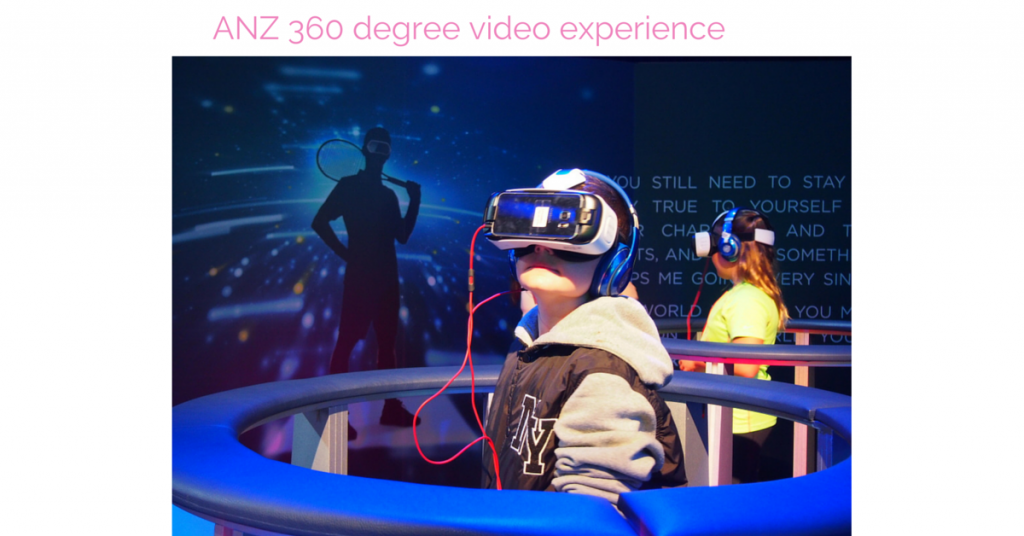 You could do a similar thing at one of the Australian Open promotional stands, watching the live centre court action as a 360 degree experience. Whilst this was impressive in concept, the picture quality of this experience was quite poor, making it far less impressive experience to what ANZ was offering, despite the fact that it was a live stream. 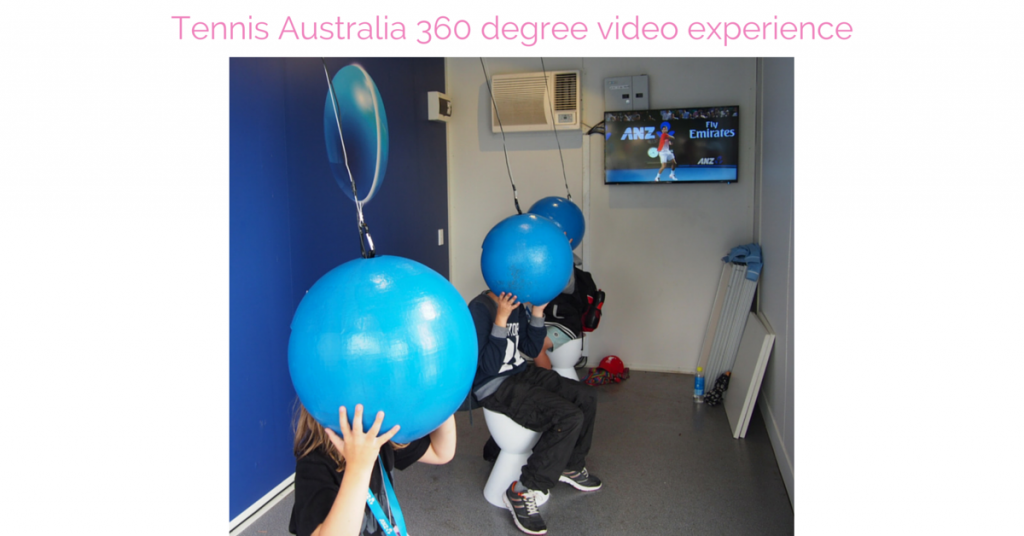 Even though the use of 360 degree video at the event was not directly linked to social media in any way, I chose to include these experiences as they highlight the rise in importance that is being placed on video as an experience and in particular 360 degree video. Facebook now incorporates the ability for you to upload and share 360 degree videos on the platform. As more people are getting exposed to this format through experiences such as these, the thirst for this type of content (and perhaps even the expectation for it) will only increase.

Free Wi-Fi at the Australian Open

Optus offered free wi-fi at the 2016 Australian Open, however I really struggled to find out how to gain access to it. I finally found out how by visiting the information booth (where the lady had to look it up as she didn’t even know). Here’s the instructions in case you are at the event now and have stumbled across this blog post in your attempt to find out how to connect. 🙂

Once we eventually found out how to access it, we were majorly disappointed that the coverage did not extend to all parts of Melbourne Park. Unfortunately Hisense Arena, with it’s 10,000+ capacity, was one of those wi-fi black spots.
I took my kids (and their iPads) with me to the tennis this year and they were keen to post their #selfies to Instagram to participate in the competitions, but the only way they could do this when we were at Hisense Arena was via my iPhone hotspot. Had they have been able to access the free wi-fi, then they would’ve participated in much more social sharing around the event. 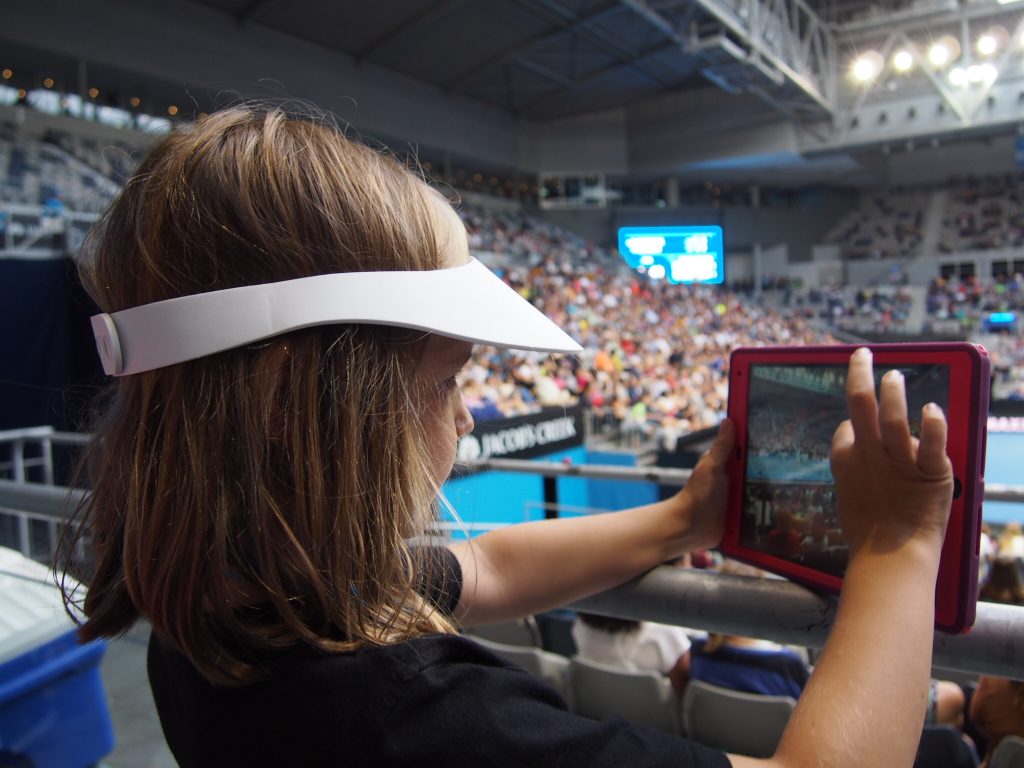 The unreliability of the free wi-fi also meant that I gave up on it in the end and as a result somehow managed to churn through 500Gb of data in one day!!! I am sure the social sharing data consideration would’ve prevented others from being so prolific in their social sharing, thus limiting the potential reach of the event.

What Businesses Can Learn From The Australian Open

Businesses can learn a lot from the use of social media at the Australian Open in 2016, including: