The Night I Kissed Gary Vaynerchuk – And Got It On Film! 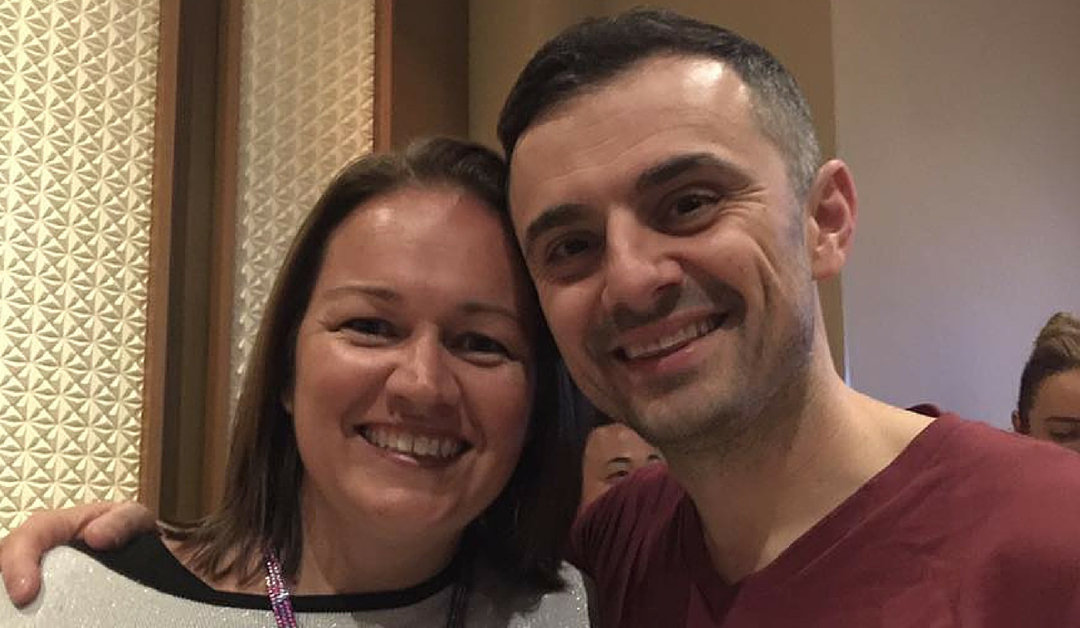 I kissed Gary Vaynerchuk at #SMMW16 whilst doing a Facebook Live broadcast!
But the kiss wasn’t even the best bit!
This is the start of something even better…
So let me wind back a bit. I went to social media marketing world 2016 (#SMMW16) eager to see Keynote speaker, Gary Vaynerchuk (Gary Vee), in action.
I have been a big fan of Gary’s for about four years, which is when I first heard (from Social Media Examiner) the story of how he used YouTube to transform his families wine business from a $3M to a $60M business in just five years.
Gary now he runs VaynerMedia, one of the world’s hottest digital agencies and is a prolific angel investor and venture capitalist. Over the years he has invested in companies like Facebook, Twitter, Tumblr, Uber, and Birchbox.
Gary is one of those guys that you either love or hate, as his brash approach to telling it like it is (F bombs and all) is polarising, but a big part of his brand and part of the reason that he commands so much attention.
Exactly how much attention he commands was the phenomenon that I didn’t quite understand.
Prior to arriving in San Diego and again as he was on his way, Gary used Snapchat, Twitter and Instagram (and maybe other channels I am not aware of) to communicate with his audience that he would having an informal meet-up poolside at the Marriott Marquis.

Meet up at 10:30pm at the Marriott marquis marina pool area for some hugs and high fives .… https://t.co/nbXHj37G0b pic.twitter.com/dqxaU3T48M

I was at the official #SMMW16 party on the USS Midway and you could physically see the mass exodus of people as the news spread about the meetup.
The scene upon arrival was manic. There were hundreds of people swarming GaryVee for their opportunity to ask questions and get a #selfie with him. This photo doesn’t do justice to the number of people that were desperate to meet this guy. AND the majority were not even attending #SMMW16. 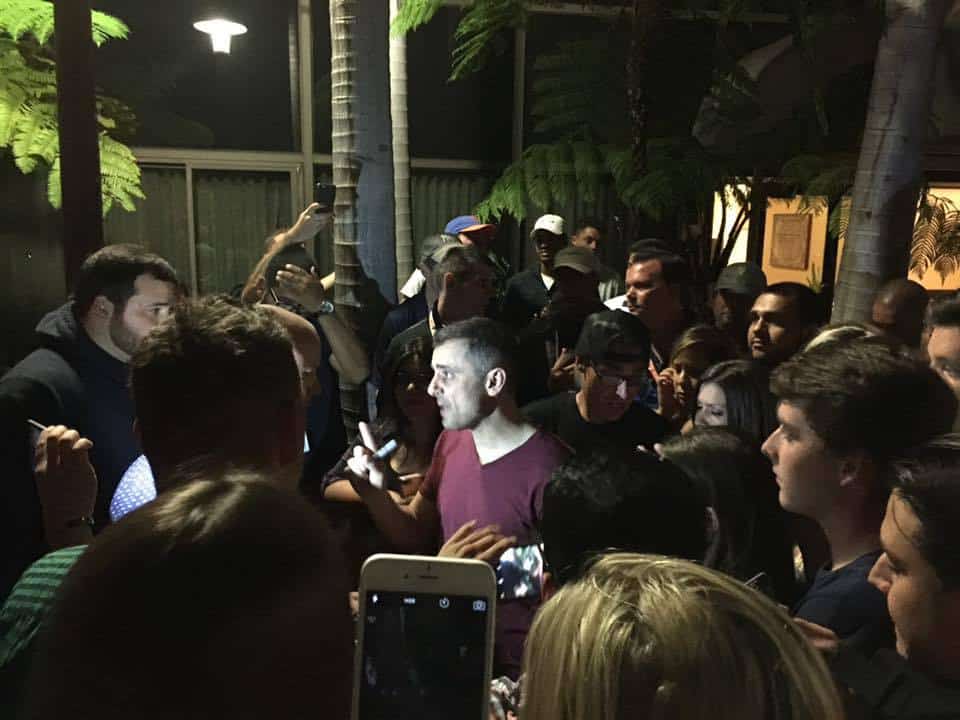 It was well past midnight before the crowds parted sufficiently that I even had the chance to get near him.

Of course I uploaded this pic to Facebook immediately and Fiona Redding, my co-host of #BusinessAddicts The Podcast, jumped on this post within seconds, asking me whether or not I had asked him on the show.
I had desperately wanted to ask him, but only had the courage to ask him if he considered himself a #BusinessAddict or not – of course he said “YES”!!!
So after seeing the comments from Fiona, I put on my big girl pants and went back for more.
We had been hearing all day at the conference about the power of video and the importance of story telling, so I decided that asking Gary Vee to come on podcast was the perfect chance to combine those two powerhouses as a way of commencing the documentation of our story about getting Gary Vaynerchuck on #BusinessAddicts The Podcast.
So when I approached him the second time, I asked him if he would do a quick Facebook Live broadcast with me.
Again he said “YES” and I couldn’t have wished for a better outcome (other than perhaps him saying yes immediately), but what unfolded in that video was pure Gary Vee gold. Live and unedited. F bombs and all. Priceless!!!
You have just got to watch it to understand the power of what I managed to do in less than 2mins using a tool that everyone now has access to, Facebook Live… And to see me kiss him as well! 😉

There are four key take-aways from this story…
Firstly, don’t be afraid to be yourself!
People either love or hate Gary Vee. Don’t water yourself down in an attempt not to polarise some people. Be yourself and let people self-select as to whether they love of hate you. That’s way better than having everyone feeling completely indifferent about you.
Secondly, build an engaged audience!
Gary has been doing this for years now. He says “jump” and his fans say “how high”. That is how he is able to attract hundreds of people to an event on short notice, become a best-selling author and build million dollar businesses, plus loads more cool stuff.
Thirdly, use video!
If you are not using video (and better still Live streaming video) to capture the stories in your business, then you are missing out. Don’t wait to be camera ready or have the perfectly scripted story. Just get out there and capture the moments.
Finally, take action!
I wanted Gary Vee on my podcast, so I took action and asked him. I am now one step closer to having him on the show and if it never ends up eventuating, then at least I will have this. 🙂

Let’s get Gary Vaynerchuck on #BusinessAddicts The Podcast

And now I have a favour to ask…
Please support me in getting Gary Vee on #BusinessAddicts The Podcast by clicking on the link bellow to send a Tweet to Gary to encourage him to come on the show.
[Tweet “I want to hear @garyvee on @BusinessAddicts The Podcast #GaryVeeIsABusinessAddict”]
Or better still, create your own Tweet, Snapchat, Instagram post (or whatever) and send it to Gary encouraging him to come on the show. I hear that video is pretty powerful so why not use that? 😉
Just make sure that you tag @GaryVee and @BusinessAddicts on your social media poison of choice and use our#GaryVeeIsABusinessAddict hashtag if you can also, so we can play along. 🙂
Then watch this space for the next Chapter in this story…